Barcelona have long been after Clement Lenglet and the Sevilla defender will officially become a player of the Catalan club today, if a report from Sport is to be believed.

An earlier report from the same publication cited the La Liga winners will sign the centre-back on July 1st. They decided to complete the operation this month so that his transfer fee will be incorporated in the 2018/19 financial year.

Sport claims since July 1st was Sunday, Barcelona had to wait until today to make the deal for Lenglet official. Sevilla tried to keep hold of the 23-year-old by making a counter-offer to extend his contract.

However, the former Nancy player has rejected the offer from Sevilla, and has decided to make a ‘big leap’ in his career and wants to join the Spanish champions. Lenglet will be Barcelona’s first signing of the summer transfer window.

The Frenchman has a release clause of €30-35m, depending on report. Barcelona may try to see if there’s a way they can spread the payments out over a longer period than this summer. 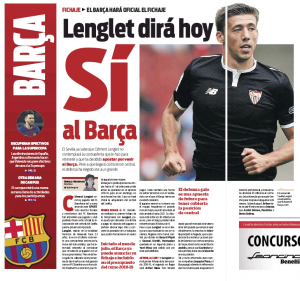 With Lenglet being the first player to arrive at Camp Nou, Barcelona will now shift their focus to Arthur Melo. The report claims the Brazilian midfielder will be the second signing of Ernesto Valverde’s side of the transfer window.

Barcelona already agreed a deal with Gremio for Arthur in March. As a part of the agreement, the La Liga winners have an option of bringing the South American to the club, either in the summer or in January 2019.