Barcelona suffered a 2-0 defeat to Real Madrid at the Santiago Bernabéu on Sunday.

Sport claims Lionel Messi was ‘too alone’ in El Clásico and therefore, the La Liga winners want to bolster their squad in the summer so the Ballon d’Or winner can ‘compete to the fullest’. They want to build a competitive squad around the 32-year-old, to help him and Barcelona to success.

It’s claimed the framework for ‘new Barca’ is already defined as they look to sign two defenders, one midfielder and two attackers.

Barcelona’s technical leaders are aware the club need ‘deep renovation’ of the squad so they can fight for every competition with Messi.

The Blaugrana will target a new centre-back and a right-back to strengthen the back four.

Barcelona have already agreed to a deal with Braga for Francisco Trincão and he will arrive at the club after this season. Sport say Trincão’s displays will dictate whether to bring in a new midfielder or not. 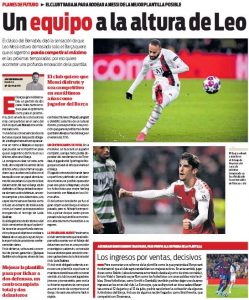 For the attack, the Spanish champions’ idea is to bring in new No 9, who will be a long-term replacement for Luis Suárez and a forward, who can play in the wide positions.

Sport seem somewhat confused here, because Trincão is a right sided attacker, very much a forward, so should be in the second bracket.

Barcelona were keen on Neymar last summer and the Paris Saint-Germain star could once again be included in the transfer list for the next market.

Apart from Neymar, Sport doesn’t provide any names of targets for other positions.