Barcelona were fined €300 for negotiating with Antoine Griezmann before his release clause at Atlético Madrid was reduced from €200m to €120m.

El Mundo reports the La Liga winners have signed a peace agreement with Los Roijblancos for €15m and as part of the agreement, will have a right of refusal over five Atlético players, including academy players and the star duo of Saúl Ñíguez and José Giménez.

Sport now explains sources from the Camp Nou have informed them the Griezmann case and right to refusal on other Atlético players are not interlinked.

The Catalan club are interested in the midfielder and the defender, and Barcelona confirmed to Sport there is a commitment to pay €15m to the Spanish capital club to keep Saúl and Giménez ‘under control’. 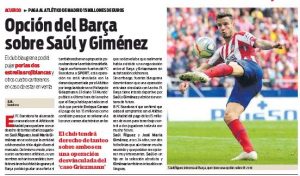 Mundo Deportivo joins Sport to suggest the two are not linked and also state Saúl and Giménez are the two players that interest Barca.

They further explain the details specified by Diego Simeone’s side.

Atlético states the right to refusal is valid if they want to sell the player, he is interested in joining Barcelona and there is another club who are looking at signing the player in question. 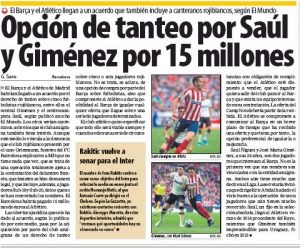 Atlético must also inform Barcelona in a short period of time, if they receive an offer for the players involved in the agreement.

If Barca then want to sign the player, they will either have to match the offer made by another club or improve it.