After the end of last season, Vincent Kompany decided against signing a new contract at Manchester City and left the Etihad as a free agent.

Anderlecht appointed the 33-year-old as their player-manager and following a series of poor results under his guidance, Simon Davies took a more central role, before he was demoted after the arrival of Franky Vercauteren earlier this month.

François Kompany, the former Premier League star’s brother, has given an interview to Belgian newspaper Het Nieuwsblad, in which he explained how Vercauteren’s appointment helps Vincent.

“Yes, but that is [Vercauteren setting up his own team] not a problem because Vercauteren respects and builds upon the philosophy that Vincent installed. They learn from each other,” François said.

“Frank Vercauteren learns things because my brother worked with Guardiola, while Vincent understands that working in Belgian football is not so obvious. My brother believes that the level in our competition is now much higher than when he left here in 2006.

“His [Vercauteren’s] arrival was primarily a help and a relief for his [Kompany’s] duties. Vercauteren is a coach who takes a lot of initiative. A stubborn character too, but they can form a top duo.”

“Franky and Vincent have known each other for fifteen years, when they worked together with the youth of Anderlecht. They know how they work.

“When Vincent used to open a big mouth as a youngster in the U21s, Vercauteren put him under right. But then he went to explain to my father why he approached Vincent like that.”

Even though Anderlecht have struggled this season, François explains Vincent doesn’t give any heed to criticism against him.

“He pays little attention to that. That is a waste of time. My brother knew on his return to Belgium that one bad match would be enough to cause a storm. Especially on social media,” he added.

Vincent’s decision to leave Manchester City and return to Belgium was seen as him taking a step back, but there were also suggestions that he would like to be the president of Anderlecht.

Responding to that, François explained: “I don’t think so. Since Vincent Kompany is a child of Anderlecht, that rumour has been circulating for years. 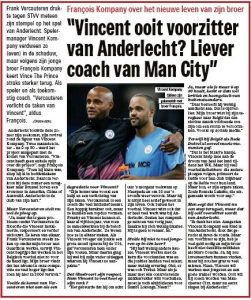 “To be president, you need a lot of money and my brother does not have the same resources as Marc Coucke. Yes, he could find investors, but he would miss the pitch too much.

“Vincent wants to work with young people and become a good trainer. He wants to become a coach for Manchester City, but now he wants to succeed at Anderlecht. “