During the summer, Aymeric Laporte was linked with Chelsea among several clubs, just like happens every year. The Athletic Club defender has been much wanted for some time but has never given an indication he’d push to leave Bilbao.

Previously, Laporte has spoken openly about interest in him, but when pressed about Chelsea by L’Equipe this week, the defender suddenly closed up.

The French newspaper put it to Laporte: “Chelsea wanted you this summer?” to which the footballer replied “I can’t say, it’s confidential.”

This new level of coy isn’t what Laporte has normally done in the past, so it’s not unreasonable to take something from it. There’s every chance Chelsea interest was genuine, Laporte turned them down, but doesn’t want to burn the Stamford Bridge.

Signing Laporte is always going to be a matter of convincing the player, as Athletic Club will only sell for his buyout clause, it’s been their policy with the club’s best players for years.

Laporte could now be coming around to the idea of a move, seeing his international hopes fade. The 23 year old was asked if he sees any logic in Zouma, Kimpembe, and Rami being chosen ahead of him: “One is playing for Chelsea (even though Zouma is actually playing at Stoke)), the other at PSG. I am in Bilbao, a club that may not be sufficiently valued in France. Here, it does not prevent some Spanish players to go to their selection.. It seems 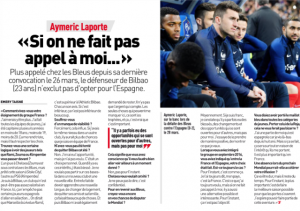 that Marseille (where Rami evolves) is superior to the Athletic Bilbao. Everyone has his opinion. If it’s lower, it’s not much lower.”

The defender has a point, and when asked if he suffers through less visibility in Bilbao, Laporte agreed: “Of course, it happens. If I had the same level at another club, I would more likely to be in France’s squad.”

Laporte’s buyout clause is €65m, a big amount for Chelsea and others to consider, but certainly not so big it puts the defender out of the picture. Such a move for Laporte could also shake Didier Deschamps into noticing him, or build public pressure behind Laporte… a sure way to influence the France manager.