Pierre-Emerick Aubameyang will soon become an Arsenal player, and be freed from the slightly odd situation he’s been put in by the German over the past few weeks.

A huge fall-out between the Aubameyang family and some in the country’s media, admittedly partly down to the player’s misbehaviour, has led to a string of toxic reporting and digs being sent mainly towards Pierre Senior.

Now that can all come to an end.

Reliable local newspaper Ruhr Nachrichten say the transfer is imminent and, according to their own information, there’s an agreement in principle for a €65m deal.

The final details remain to be clarified, say Ruhr Nachrichten, and Olivier Giroud will not be part of the deal.

French newspaper L’Equipe reckon they’ve also got information on it, although it could be 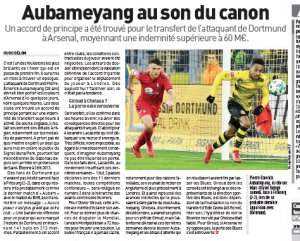 ‘inspired’ by others, and they claim there’s an agreement for more than €60m. It’s stated Aubameyang could be wearing the shirt in days or ‘even within hours’.

Arsenal fans will be hoping this one goes through today, if only for their sanity.

German newspaper Bild seem to be behind on all of this, perhaps deservedly after the way they’ve treated the player’s family recently, but they’ll surely go huge on it soon.

Perceived racial slur and Hitler dragged into Aubameyang to Arsenal.

It’s all getting a bit silly and Bild need to reassess their approach.