Feyenoord and their local media have got all tough over Nicolai Jorgensen moving to Newcastle United.

De Telegraaf have another big article on the situation in their Monday edition, and go with the headline ‘Deadline voor Newcastle’, which you don’t need to speak Dutch to understand.

Even the wording of the actual article sounds like there’s been a special effort to sound tough, and it must be remembered this will all be for a Dutch audience.

De Telegraaf say either Newcastle United come up with ‘extra millions’ today or the deal is off: ‘Feyenoord has taken a harder stance towards Newcastle United, who have been trying for a week to buy Nicolai Jorgensen. The English Premier League club has received a deadline for tonight from Feyenoord to put millions more on the table for the Danish striker.’

It’s explained that if Lee Charnley doesn’t come up with a new offer by early evening then everything is dead, and it’s added: ‘Feyenoord only want to do business if there is a ‘disproportionate’ amount on the table and otherwise does not cooperate.’

De Telegraaf say the reason for the deadline is that Feyenoord have a cup match against PSV on Wednesday night and that’s deemed ‘much more important’ that the Jorgensen transfer, and there’s no way Newcastle will be allowed to disrupt the build-up.

In reality, it would be no surprise if this evening came and went and, if Charnley offered a little over €20m on Tuesday morning, Feyenoord still went for the deal. 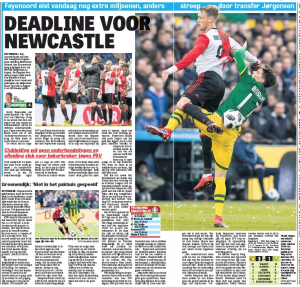 De Telegraaf first published Feyenoord’s big money stance in the middle of last week, saying it was €25m or no deal. Then, after a new Newcastle offer of €17m, it was claimed Feyenoord actually want over €20m.

Therefore, forgive us for not believing the deadline isn’t as pressured as stated, but Newcastle may not want to chance it.

Reading between the lines of the Dutch report, it seems Feyenoord, and their friendly media, have been somewhat buoyed by reports of how much pressure Rafael Benitez is putting on Newcastle over the deal.