This is how Corriere dello Sport decide to go about the latest Gianluigi Donnarumma rumours, with it pretty much guaranteed the Italy international will leave Milan this summer on a free.

The soon to be official transfer of Mike Maignan from Lille to San Siro was the final blow, and it seems Mino Raiola could, once again, pocket a nice wad of cash with a big transfer this summer.

Having seemingly been around forever and yet still only 22, the goalkeeper is bound to have a multitude of suitors in the coming months fighting for his services, among which could be Manchester United.

Corriere explain that he will only go in a team ‘that will first have to get rid of his number one’, meaning the likes of Juventus and Barcelona would need to offload Wojciech Szczesny or Marc-André Ter Stegen.

That’s where the ‘attention to Manchester United’ comes in, as Ole Gunnar Solskjaer might not have definitive first-choice at Old Trafford.

David De Gea was indeed displaced as the league goalkeeper by Dean Henderson, although whether that was fully due to form or simply the England international performing well in the Spaniard’s personal absence and his manager not wanting to disrupt a good thing remains to be seen.

The former Atlético Madrid starlet should start in the Europa League final against Villarreal on Wednesday, but could that be his final game at the club?

Any arrival of Gianluigi Donnarumma at Old Trafford would certainly see him leave, as it seems unlikely that Henderson will be moved on anytime soon.

Paris Saint-Germain are also mentioned, and yet they also have a very consistent number one in Keylor Navas, even if he would be cheaper to get rid of than De Gea at United.

It’s stated that ‘all teams involved already know Raiola’s conditions’, and ‘evidently, they are all willing to grant Gigio a double-digit wage (€10m/year or more) and the agent a commission of around €20m’. 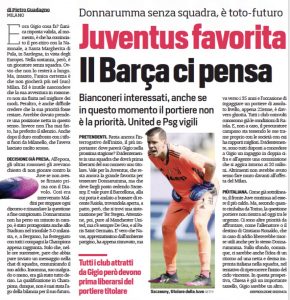 That’s because ‘otherwise, it would have made no sense to place a wall in front of Milan’s offer’.

On paper, Juventus ‘continue to be the hottest’ on the case, but it’s not among their priorities.

That means the door is open for anyone who wants to get an almost world-class 22-year-old goalkeeper, thus securing the future at the position for some time to come.

Whether that’s something Solskjaer believes he needs at Manchester United, however, we’ll soon find out.