Tottenham Hotspur sacked Mauricio Pochettino in November 2019, months after he guided the north London club to their first ever Champions League final, which they lost to Liverpool.

The Argentine was without a job for more than a year before Paris Saint-Germain confirmed him as their new coach back in January.

Pochettino’s side are comfortably sitting on top of the table this term, with a 10-point lead over RC Lens, who are in second spot.

L’Equipe on Friday have published a detailed interview with the former Spurs manager, during which he was quizzed about his football philosophy. When responding to that, Pochettino detailed the difference in approaches between PSG and Tottenham, with the Spurs task a much longer one which enabled him to implement a style. 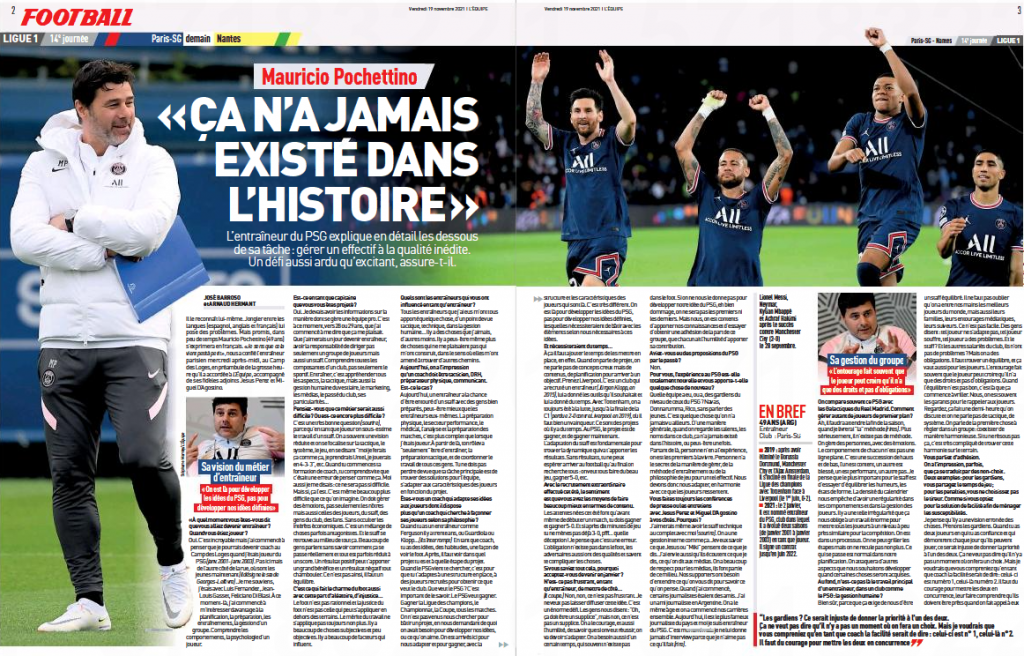 “When PSG come looking for you, it is so that you adapt to an existing structure, to the players recruited, to get what the club wants,” he explained.

“What does PSG want? PSG want to win. Win the Champions League, the championship, the Cup, all matches.

“We didn’t come looking to build a project, asking what we needed to develop our ideas, or what we like. We came here to adapt and to win, with the structure and the characteristics of the players who are here. It’s very different.

“In fact, to that must be added the time to put them in place. Take Liverpool. This is a club that recruited a coach (Jürgen Klopp, in 2015), gave him the tools he wanted and gave him time.”

“With Tottenham, we have always been in the fight, until the Champions League final (lost 2-0 against Liverpool in 2019), where you need a win. These are projects where there is time.

“At PSG, the project is to win, and to win now. The adaptation of the staff is fundamental to find the dynamic that will bring you results. Without results, you cannot hope to get to football that in the end we all want: we all want to play a good game, win 5-0, etc.”

On insinuations he doesn’t really have a style, given he’s just trying to get the best out of individuals at PSG, Pochettino again referenced Tottenham.

The former Southampton boss said the style changed over the course of his stay at Spurs.

“I say this with great respect, but this question reflects a certain lack of respect. It’s like telling you that you don’t have style in your writing. Of course, you have one, you’re a professional and that’s why you’re sitting there,” he explained.

“Every coach, at the highest level as an amateur, has a style. When you work to become a coach, you develop your style: your tastes, your management, your methods with your staff.”

“We are a staff who has a defined style, a philosophy, ideas. Then the question is how and when you can implement what really suits you. And that depends on the requirements of the club, as we said earlier.

“If you look at what we have done at Espanyol, Southampton or Tottenham, you will see the style of play that we like. If you watch a game from our first and third seasons at Tottenham, it’s not the same. Because there was a strategy to get there.”