Barcelona have been linked with many attacking options for the winter transfer window, as they look to give Xavi Hernandez more choice for the second half of the season.

The situation with Sergio Augero and an uncertainty over when he’ll return to the pitch has made the situation more serious for the Catalan club.

Raheem Sterling has been linked repeatedly and there’s been endless claims in recent weeks about a move for the Manchester City player. After initial optimism, the Catalan media took a step back as this week went on, with the financials of a deal looking increasingly difficult.

That means other options are being looked at, and in a ‘top secret’ report, Mundo Deportivo say one of those is FC Basel’s Arthur Cabral.

The jump from Swiss football to Barcelona would obviously be huge, making the potential signing a surprise one. According to the report, the 23-year-old has been monitored and the outlines of a possible deal have been lined up.

Deco is helping to build a deal, with the former Barca star now working as an intermediary, and it’s explained the move could happen as a loan in January with a mandatory purchase clause of around €8m. 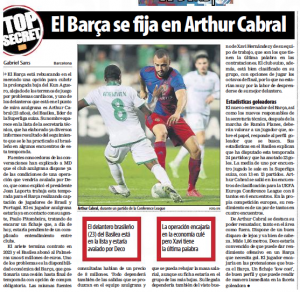 Xavi’s say would be key over whether the deal goes ahead or not, and, of course, FC Basel will have a rather big say. Whether the Swiss side will feel €8m is enough for the player is questionable.

Cabral has scored 23 goals in 24 appearances this season, impressive statistics which are added to with eight assists.