Sometimes when claims of interest are reported, especially in Italy, the story can then vanish and never be spoken of again.

That isn’t the case here, with several Italian newspapers covering it today.

Tuttosport, Juventus’ local sport newspaper, report Aston Villa’s negotiation to sign the goalkeeper has ‘developed in recent hours’. The Premier League club have ‘expressed interest’ in the signing, and the player is keen on a move.

He wants to be able to have regular football so he can show he’s ready for Italy’s Euro 2020 squad. A move to Benfica failed, reportedly over medical concerns, and Porto have also been linked.

Juve want around €15m but they’re going to have to be realistic given the player’s injury concerns, and it’s likely that any agreement, with any club, would initially be on a loan basis.

The Turin club’s sporting director Fabio Paratici is in London for a transfer ‘blitz’, which means he’s trying to sell players to Premier League clubs, and Tuttosport say Aston Villa want to take advantage of the situation. 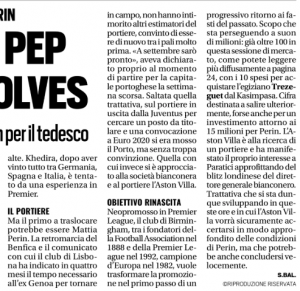 They do concede Villa will want to know the player’s medical condition ‘in-depth’, which could kill the deal.

“He will stay here” – Club chief insists Tottenham not signing player, despite claims in recent days

“He will stay here” – Club chief insists Tottenham not signing...

Player ‘trying to push through’ move to Manchester United – Agents...