On June 6th, we covered claims from L’Equipe that Aston Villa were set to use their option and sign Anwar El Ghazi on a permanent deal.

They loaned the player from Lille last summer and he helped the club achieve promotion to the Premier League, via the play-offs. A deal was always expected to be reached, with Villa wanting him, Lille needing money, and El Ghazi obviously not immune to the attraction of England’s top flight.

L’Equipe put the transfer fee at €9m/£8m, but now they believe it was actually significantly lower.

In their Tuesday edition, the French newspaper cover the move now being completed and announced, and then state Aston Villa have paid Lille €5m for the player, just over half of what was previously claimed. 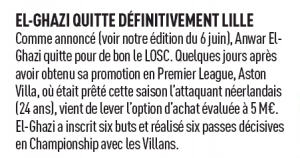 There’s no further explanation from L’Equipe over why the figures differ. Of course, they may be wrong, or it could be related to a loan fee being deducted from the sum, or Villa getting a better deal by paying quickly, with Lille needing to raise money.