Aston Villa remain keen on a deal for Werder Bremen forward Milot Rashica after failing to get him in the summer transfer window.

That’s according to DeichStube, who say the Villans will ‘look very carefully’ at the 24-year-old between now and January to see if he can recover his best form.

Aston Villa were heavily linked with the forward throughout the summer window, with a claim at the beginning of October that they were in ‘very advanced’ negotiations for his signature.

A move never happened, but their interest is well established, with the Bundesliga side even hinting a cheaper deal may be possible in January.

Whether Villa were still interested hasn’t been mentioned, but Deichstube insist they are as Aston Villa want to carry on reinforcing their forward line.

Rashica is ‘one of the candidates’ they are looking at and they will find his club very open to a deal if they push ahead with an attempt to sign him.

It’s explained that Bremen are ‘urgently dependant’ on transfer income and have already told the player that he ‘must be sold’ in January or next summer.

This is backed up by Sport BILD, who say the club are ‘doing everything possible’ to ensure that Rashica will leave the club in the summer at the latest. 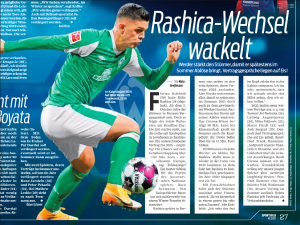 They also have an asking price, claiming that they are ‘expecting’ €20m at least for the forward.

The newspaper make no mention of Aston Villa, or whether they’d be willing to pay that price, DeichStube don’t mention the latter either, but given their summer spend it’s not unreasonable to think they would be open to it.

Either way, it seems Rashica is likely to be linked heavily until January arrives, with his club very, very keen on getting a deal done and Villa’s interest well established by this point.