Home Premier League Arsenal “We will do what is necessary” – Agent suggests player will push...
SHARE

Brentford goalkeeper David Raya has ‘caught the attention’ of Arsenal after his ‘splendid’ debut season with the Bees, according to Sport.

He kept 16 clean sheets and conceded 42 goals in 49 matches in all competitions last campaign.

The 24-year-old has never played in the top division so far, and despite that, Mikel Arteta and the Gunners technical leaders believe the qualities he possesses are of Premier League level. Raya is the ‘chosen one’ for Arteta.

Arsenal’s interest in the Spaniard has also been confirmed by his agent, Jaume Monell.

The representative stated the FA Cup winners tried to make a proposal, but Thomas Frank’s side are refusing to negotiate since the keeper has three more years left on his contract.

Raya, for his part, retains a desire to play in the Premier League, ‘even more so’ at a club like Arsenal. The Gunners view the Championship star as one for the future, and they hope to sign him on a long-term contract.

Arteta took charge at Arsenal last December, and included Iñaki Caña as part of his backroom staff. The goalkeeping coach arrived at the Emirates from Brentford, and Sport state Caña is one of the ‘main supporters’ of his compatriot’s signing. 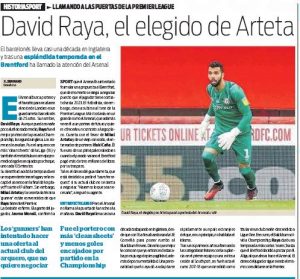 Raya is keen on joining Arsenal, and is ready to submit a transfer request to push for a move.

“We will do what is necessary,” his agent told Sport.

Arsenal chasing the Brentford custodian gives an indication that Emiliano Martínez could be allowed to leave the club this summer.