Home Premier League Arsenal Arsenal player ‘would welcome’ going to another side – Club to only...
SHARE

Today’s edition of Mundo Deportivo explains the 25-year-old ‘would welcome’ going to the Catalan club this summer.

Barca, however, can only consider signing the Gunners right-back if they manage to sell Nélson Semedo.

The Portugal international is one of the few players whose sale can help the La Liga side raise a lot of money. They value him around €40m.

Should Barca manage to place Semedo at another club and earn well in the process, it will then open a space to bring in a replacement.

According to the newspaper, Bellerín is a priority target for Paris Saint-Germain, but he would prefer signing for his old club over PSG.

The Arsenal defender’s surroundings would have contacted Barca to find out about the possibility of the player moving to the Camp Nou.

Should Barca manage to sell Semedo, they will not invest a large part of the transfer fee in signing his replacement. 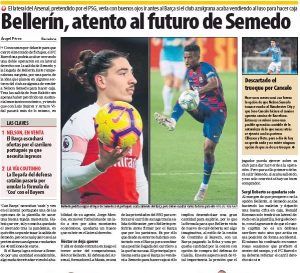 Mundo state Ronald Koeman’s side can only think of signing Bellerín on a loan deal with an option to buy.

In this regard, the pressure the Spaniard will put on Mikel Arteta’s side to get out of the Emirates will be ‘vital’.

To sum it up, Bellerín can only arrive at Camp Nou on a loan deal, and only if Barca find a ‘good buyer’ for Semedo before the window closes in less than a month.

“The priority is renewal” – Agent denies contacts for Chelsea player,...

“Against all odds” – Huddersfield coach speaks to Spanish media, insists...