According to newspaper Correio da Manhã, the 20-year-old was one of the targets when Arsenal visited the Estádio da Luz on a scouting mission.

Now it seems that the campaign to sell Dias in the next transfer window is on, because today, newspaper Record brings a big story saying he’s expected to leave the club very soon.

The certainty for a departure is so big that the Eagles would already be looking for a replacement, while Dias has pretenders in ‘England and Italy’. 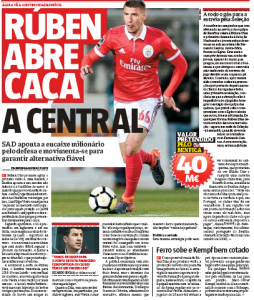 Record are sure that the defender should go for at least €40m.

That would surpass the amount they got when selling Victor Lindelof to Manchester United last summer for €35m.

Considering that Dias has a €60m release clause, that isn’t a big demand from Benfica, and sounds pretty realistic, unlike some news we see coming from Portugal.

Now we wait and see if Arsenal are really that keen, or if that was just a one-time scouting mission.