Last weekend, reports in the British media linked Arsenal with a move for Philippe Coutinho.

Barcelona signed the 28-year-old from Liverpool in January 2018 and will have to pay the Reds an additional €20m, if the Brazil international makes 100 appearances for the La Liga side.

On Tuesday, Mundo Deportivo reported the Catalan club want to avoid it and that’s why they would be ready to let the attacking midfielder leave for a ‘much lower price’.

Sport on Wednesday relay claims made in England about the Gunners’ interest in the former Reds star and then provide their own information on this case.

It’s claimed the Spanish club view Coutinho as an ‘asset to make money’ in the next market, and he is included in the list of players Ronald Koeman’s side are looking to cut ties after this season. 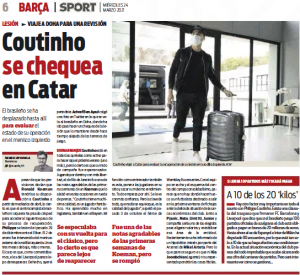 This should come as an encouragement for the north London club or any other side interested in signing the South American.

Sport, however, states what’s certain is neither Coutinho, nor his agent, Kia Joorabchian, ‘will make things easy’ for a potential transfer in the summer.

That probably means Arsenal will have to turn on the charm, and open the cheque book.