In their Friday and Saturday editions, the Catalan press have been picking out the likeliest targets for Barcelona’s Neymar money, and Arsenal linked Thomas Lemar hasn’t been one of them.

The only time the Monaco player has had a significant mention recently is to be targeted as a Liverpool replacement for Philippe Coutinho, with the Catalan press covering it because of the Brazilian to Barca angle.

Despite that, L’Equipe have gone big on Lemar to Barcelona in their Saturday edition, with the Spanish club now providing a ‘serious’ worry for Arsenal.

L’Equipe say: ‘Arsenal is likely to have serious competition for the French international.

Liverpool, Manchester City and especially Barcelona have moved on to top speed.’

Arsenal’s three offers for the player are mentioned, and then the French newspaper states ‘Liverpool, Manchester City and Barcelona have positioned themselves in recent days.’

L’Equipe go on to state: ‘Lemar could be among those who would come to replace him. Obviously, without Neymar, the Catalans could evolve in a different tactical scheme 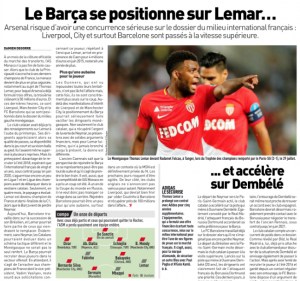 and the Monaco player would not be the only reinforcement.’

It’s not exactly concrete and there’s no reason for serious Arsenal panic yet. L’Equipe do say Barcelona interest particularly interests Lemar, but it would have to be really concrete for that to be relevant.

As for Manchester City and Liverpool, there’s not really a great deal said, other than a big amount for Coutinho could see the Reds sit favourably in a chase.

Something, but mainly nothing.