Barcelona are keen to secure the winger’s services and have reached an agreement with him. However, they cannot offer the fee requested by the Whites to conclude the deal.

Sport, in their Friday edition, state the 25-year-old is the first option for the La Liga side, if Ousmane Dembélé decides not to sign a new deal at the Camp Nou.

The high demands set by Leeds have seen them look for alternatives and this is where Ángel Di María, who is available on a free transfer, fits in.

With regards to Jesse Marsch’s man, the newspaper states everyone wants him since he has decided to leave Elland Road this summer. Raphinha’s priority is to join Barca and his agent, Deco, having closes ties with the Catalan club plays in their favour.

Leeds are tired of waiting for Barcelona to make a firm offer, especially at a time when there are other Premier League clubs interested in the Brazil international.

Sport state ‘one of them is Arsenal’ and the north London club have already made the first offer to the English club, this was rejected by Leeds. They value their attacker at €70m, which is an ‘extremely high figure’. 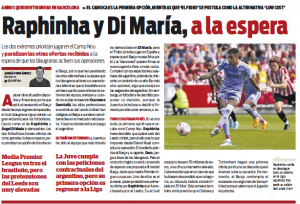 Apart from Arsenal, Tottenham Hotspur and Chelsea are mentioned. With regards to Mikel Arteta’s side, the report adds ‘it is not ruled out’ they will raise their offer for the South American.

Raphinha continues to favour a move to Barcelona, but it will be of no use if they don’t end up making an offer that can convince Leeds.