Finishing eighth in the Premier League last season, Arsenal, led by Mikel Arteta, decided it was time for some sort of revolution within the club.

It’s widely expected that players will be sold, while there will be an influx of new signings in order to ensure the woes from the previous campaign aren’t repeated.

As well as Ben White, the Gunners have been linked with a number of midfielders, the latest of which is Piotr Zielinski, now on holiday after a disappointing Euros campaign by Poland’s expectations.

This is according to Il Mattino, who let their readers know that Arsenal have ‘shown up’ for the Pole, suggesting they would be interested in bringing him to the Emirates.

What’s encouraging for the London side is that the local newspaper make it clear ‘no player is unsellable’ at Napoli these days, meaning there is a deal to be made at the right price. 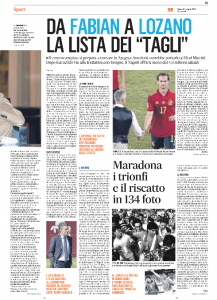 However, what isn’t as great is the fact ‘prices are high’, meaning Arsenal would have to dig deep to please Aurelio De Laurentiis.

Do they have the funds to get Ben White for £50m and spend big on a midfielder all the while bolstering other areas of need?

That’s doubtful, unless they make a couple of big sales along the way…