Considering they didn’t have a lot of money for their January window and aren’t getting any for the transfer of Aaron Ramsey to Juventus, it’s hard to know how spend-happy Arsenal are going to be in the summer.

Having to focus on loans, like that of Denis Suarez, the Gunners failed in attempts to sign Ivan Perisic and Yannick Carrasco, but they’re already looking to the summer, according to Corriere dello Sport.

First reported by TuttoMercatoWeb on Monday evening, and confirmed by the Italian newspaper on Tuesday, Arsenal are said to have sent scouts to watch Milan vs Cagliari over the weekend in a bid to watch Suso.

The former Liverpool midfielder knows England well, and with a release clause of around €40m or so (other reports have it at €38m), he would be within the Gunners’ means. 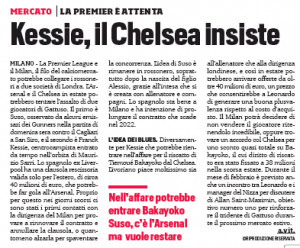 However, Milan, aware of the interest, are planning to try and renew the Spaniard’s contract, and their aim, as well as giving him a pay rise, would be to either cancel the release clause altogether or, if Suso refuses, increase it at least.

Convincing him to stay shouldn’t be too difficult, according to Corriere, as Suso and his partner recently welcomed a son, Alessio, and moving away from Italy, where he is happy and gets along well with everyone at the club, isn’t a priority.

Arsenal will need to be very convincing, then.