It’s mostly been Manchester United and Liverpool linked with Nicolo Barella over the past few months, but a new club has joined the list of Premier League clubs keeping an eye on the Italy international: Arsenal.

Gazzetta dello Sport on Tuesday look at where the country’s two new stars, the aforementioned Cagliari midfielder and Cristiano Biraghi, could end up, with Inter and Milan right in the mix.

The Italian newspaper once again warn their readers of the competition from abroad, since the 21-year-old has already expressed a desire to play in the Premier League.

In their warning, they report that Arsenal recently came to watch the central midfielder, and the scout ‘noted down his qualities’, presumably to bring back a stellar report to Unai Emery. 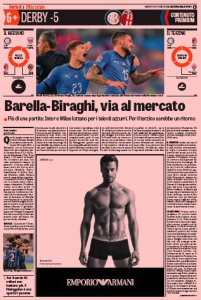 Having already bolstered their midfield in the summer with the arrival of Lucas Torreira, there’s a strong chance that Barella could be one of the options to fill the inevitable gap in the squad Aaron Ramsey’s departure will leave come the end of the season.

As Gazzetta explain, a January move seems unlikely, especially since Cagliari are very reluctant to see their starlet go in general.

Next summer, however, anything can happen, and the general consensus in the past is that €50m will be the asking price.

One to keep an eye on, since this is the first real mention of Arsenal, at least in the Italian papers.

Liverpool player ‘unhappy with current situation’ – Surprise as ‘departure is...