Good news for Manchester City in the race for the Benfica wonderkid João Felix, according to the Portuguese press at least.

As reported by newspaper Record, the Eagles turned down a bid from Monaco for the 18-year-old in the last transfer window.

Record writes that the French side wanted to pay up to €20m for the youngster, but Benfica president Luis Filipe Vieira made it clear that it wasn’t their intention to sell the player so early in his career.

That reportedly made Monaco give up on making their bid official, partly because Felix’s €60m release clause shows that he’s very well protected by the Eagles. 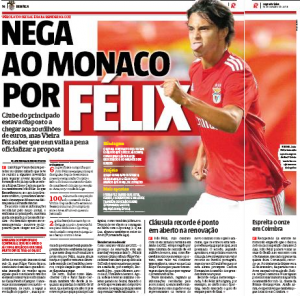 Record claims that Manchester City and Paris Saint Germain are the other clubs who are keen on Felix, and have been following his first steps in the first team squad.

The midfielder has six appearances for the Eagles this season, scoring two league goals already.

Quite impressive for a 18-year-old who made his debut for the club just a few months ago.