Arsenal are ‘ready to enter’ the race for Udinese right winger Nahuel Molina and compete with Atlético Madrid for his signature.

That’s according to Tuttosport, who say the Gunners and Barcelona are ready to make their move for the 24-year-old Argentine.

They report that Atlético Madrid are ‘making progress’ on Molina, who is also a target for Juventus as they look to improve their right flank.

He’s been earning admirers this season courtesy of his performance with Udinese, which have seen him rack up seven goals and four assists in 33 games in all competitions.

Those performances have not gone unnoticed, and the ‘traffic grows’ according to Tuttosport, who say that Barcelona and Arsenal are ready to enter the race and position themselves between Diego Simeone and the Bianconeri. 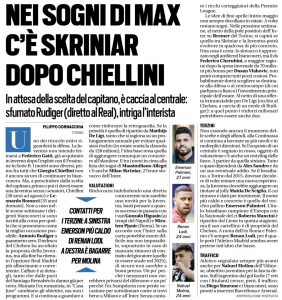 There’s no mention of an asking price for the winger, but Udinese are in no rush to sell as they have him tied down to a deal until 2026 anyway.

That means they can ask whatever they like for the player, who arrived on a free transfer from Boca Juniors II back in September 2020.

Arsenal, then, might have to dig deep if they want him, particularly given the competition that seemingly exists in the market.