On Wednesday, we relayed claims made in Italy that Tottenham Hotspur are ahead in the race to sign Dejan Kulusevski.

It was also explained Spurs must be aware of Arsenal as their north London rivals are also interested in the Juventus player.

Today’s edition of Corriere Torino explain the Gunners are now ‘in pole’ position to secure the forward’s services.

These claims are further backed up Calciomercato, who go on to explain the Emirates club are ‘overtaking’ Antonio Conte’s side in the chase for the Sweden international.

It’s claimed it’s now ‘more Arsenal than Tottenham’ for the former Atalanta man, who has made only five starts in all competitions this season. 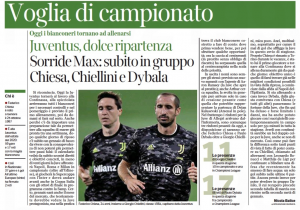 The Turin club, for their part, seem willing to let Kulusevski leave in the winter market and therefore are ‘waiting’ to receive an offer of around €35m for the attacker.

With two sources claiming Arsenal are ‘in pole’, it remains to be seen whether they will meet the demands set by Juventus in the January window.