A few days ago we covered a claim from Spain that West Ham had sent a representative to Barcelona to find out the conditions to sign Rafinha.

Spending the past season on loan at Inter Milan, Rafinha had been willing to make the move permanent and Inter had a clause to use. But, just like with Joao Cancelo, the Italian club aren’t in the financial situation which allows big signings and need to wait and see how things develop off the pitch.

West Ham were pushed away by Rafinha’s camp, for now, with it being explained he wants to see how things develop with Inter, and also what other offers present themselves.

Well, according to Sport, Arsenal are now in the picture. It’s reported Unai Emery’s club have also put an offer forward for the Barcelona player. This seems like a general offer to join rather than a monetary offer, there’s no mention of a bid or even what Arsenal or West Ham would be looking to pay for Rafinha. 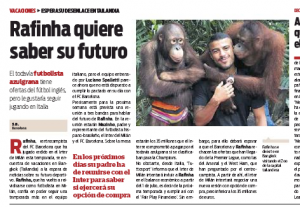 But what was for the Hammers is now the same for the Gunners, with Rafinha preferring to wait a while to see what happens. Barcelona aren’t as keen to wait, they’d be happy to get a sale agreed as soon as possible.

Meanwhile, the player himself is on holiday in Bangkok, pictured playing with some orangutans.