They say the Lions have been watching him for a while now, and could make an attempt in case Bruno Fernandes leaves the club next year.

But it shouldn’t be an easy task for Sporting, since several clubs have already shown interest in the wonderkid, including the likes of Arsenal and Manchester United. The Premier League sides are said to be part of a list which also includes Benfica, Lille and Valencia.

Barco hasn’t only been impressing in the MLS, but also in Argentina’s youth ranks, where he’s recently played the U20 World Cup. 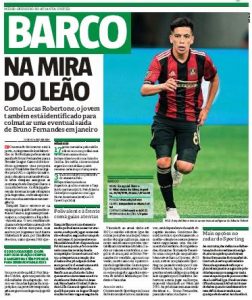 Record claims that Atlanta signed Barco for €15m from Independiente last year, and now they would try to cash in with his sale.

In case Premier League clubs are really in for the player, we reckon it’s very unlikely for Sporting or even Benfica to be able to fight for him.