After a long time of negotiations, Alex Grimaldo has finally signed his new deal with Benfica, extending his contract until 2023.

Newspaper A Bola today brings a long story about this renewal, claiming there was a time when the Eagles thought they’d lost the player.

Grimaldo has been linked to several clubs in the past two years, and despite the new deal, A Bola doesn’t rule out new attempts to sign him. They recall the two main interested sides, which have been Manchester City and Napoli.

Regarding the Premier League club, it’s said Pep Guardiola knows Grimaldo pretty well from his time at Barcelona, and has ‘positive’ notes about the left-back. 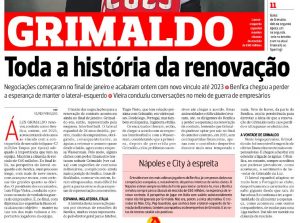 Grimaldo’s release clause hasn’t changed, and his price tag continues to be of €60m. It’s likely the player’s agents insisted on that to extend the contract.

So in case any of these clubs still want to sign him, things basically stand the same, because that’s always been the amount demanded by Benfica.