In a short story, A Bola reports that the goalkeeper is still wanted in England and France, mostly because of the recent rumours surrounding him.

They claim that from England, it’s Arsenal and Manchester City who have been mostly linked to the goalkeeper, and in France it’s Marseille who want him.

With a €45m release clause, Patrício has a contract with Sporting until 2022. Since the player’s wish to join a Premier League side was reported in Portugal, the links have continued.

The Portuguese media understandably rate Patrício highly, although in England it could be a surprise if Arsenal or Manchester City swooped in for him this summer. 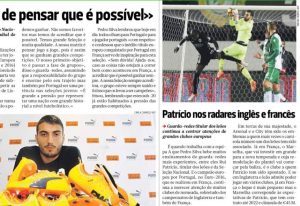 Next to the Patrício story, A Bola has an article about Sporting’s young goalkeeper Pedro Silva, who is trying to get a chance in the first team.

So it sounds they tried to reawaken the Arsenal and Manchester City rumours just to say the youngster may have a chance, because there’s actually nothing new regarding the club’s number one.