Home Premier League Arsenal Arsenal ‘on the lookout for heir to Aubameyang’ – Have name in...
SHARE

With the release of Pierre-Emerick Aubameyang, who eventually signed for Barcelona, and the possibility of Alexandre Lacazette going to another club on a free before the end of the season, there is a drastic need for a new striker at Arsenal.

Mikel Arteta is acutely aware of this, as is Edu Gaspar, since the club pursued Dusan Vlahovic quite strongly during the January transfer window, only for the Serbian to choose a move to Juventus instead.

This means Arsenal have to turn their attention to other targets, with the likes of Alexander Isak pushed forward by the media.

Another who could do the trick is Victor Osimhen, currently at Napoli, who is a player the Gunners know well, wanting to sign him back in 2020.

Gazzetta dello Sport have a look at the forward’s situation on Monday, recalling that Newcastle have been offering and certainly could come back in the summer with a big offer.

They aren’t the only Premier League club with money, however, and it’s pointed out that ‘Arsenal are always on the lookout for the heir to Aubameyang and have a substantial budget’, especially since they are currently on track to qualify for the Champions League. 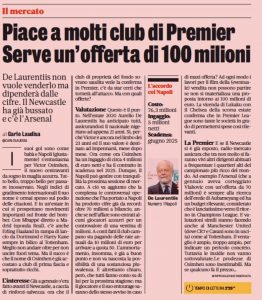 Manchester United and Tottenham are also named as potential suitors for the Nigeria international, but ‘the range is wide, too wide, to indicate a concrete danger’ at this moment in time for Napoli.

Arsenal appear to be there, however, just keeping an eye on matters, knowing full well that firepower will be required for next season one way or another, and money will need to be spent.

How much does a Victor Osimhen cost these days, we hear you ask? Gazzetta believe that any sale ‘cannot start unless a proposal of around €100m materialises’.