During the past few days, Portuguese winger Gelson Martins has been linked to a series of clubs. Claims from Italy have reported the chase from Arsenal, Lazio and Liverpool for the player, while reports from England said Everton would be interested as well.

All these stories obviously get a lot of coverage in the Portuguese press, where there’s great expectation about the players who Sporting are losing for free this summer, as Gelson is one of those who rescinded their contracts.

Now as Diário de Notícias covers the story today, they claim that Lazio are unlikely to have much of a chance in case there’s a battle against the Premier League clubs.

According to the newspaper, Gelson isn’t much keen on continuing his career at Lazio, and would favour a Premier League move. 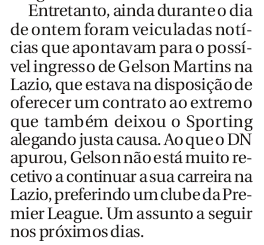 But Diário de Notícia doesn’t name any of the English clubs who are keen on him, and that’s why we can’t point out any specific Premier League side here.

From these clubs who have been linked, it seems the strongest in the race would be Arsenal, as the Gunners reportedly offered €30m (twice) when Gelson was still a normal status Sporting player.

But now with the 23-year-old being a free agent, all sides have equal conditions to offer him a contract and get him without spending a transfer fee.