Besides claiming that the Eagles have offered €20m to sign the midfielder, the newspaper also managed to interview Mario Celso Petraglia, who’s the president of the Brazilian side.

It turns out that Petraglia ended up not only confirming that he had a bid from Benfica, but also said he expects an attempt from Arsenal.

“Arsenal are interested, but will only make an offer towards the end of the season.” 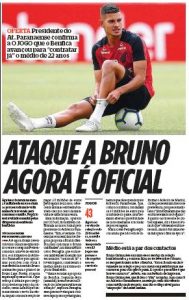 There’s another club considered to be strong in the race, and that’s Atletico Madrid. They had a buying option over the player, but according to Petraglia, “they already informed that they are not interested”.

In an update we’ve covered from A Bola today, it’s been said that talks are on hold since Athletico don’t think €20m is enough to take Bruno Guimarães from them.

The player is protected by a release clause of €40m.