It’s fair to say that the transfer of Bruno Guimarães to Benfica is close to becoming a saga, since the Portuguese side have been struggling to sign the midfielder from Athletico Paranaense.

Newspaper A Bola has a big story about it today, saying the Eagles are offering an initial amount of €20m, with 10% of a future sale, but the Brazilian side want more.

Athletico are said to be ‘playing’ with other clubs who are interested, and two potential contenders are named: Arsenal and Borussia Dortmund.

The English and the German sides are said to be ‘attentive’ to Bruno Guimarães, although there are no details on a possible negotiation with these two. 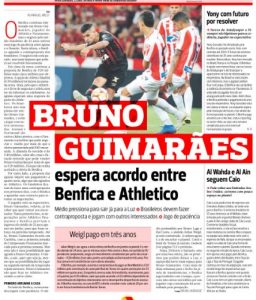 Besides offering only €20m, Benfica want to pay that amount in several instalments, and that’s why Athletico have been looking for a better deal.

Bruno Guimarães is protected by a release clause of €40m, and even though they don’t expect to get it all, there’s hope that a bigger offer could arrive.

Arsenal may be being used here to pressure Benfica, or perhaps it’s one Edu is keeping an eye on.