Arsenal are ‘one of the strongest teams bidding’ for Barcelona goalkeeper Neto, according to Mundo Deportivo.

The 31-year-old arrived at the Camp Nou from Valencia in 2019. Since then, he has been a backup for Marc-André ter Stegen, forcing him to spend time on the bench.

Neto has ‘decided to leave’ this summer and has the approval of the La Liga side, who are looking to lower their wage bill by cutting ties with some of their players.

As of now, nothing is closed, but the Gunners are still in the picture for Neto’s signing. They looked at him in the winter market and ‘continue to think’ of the custodian to bolster the goalkeeping position next season.

Mikel Arteta has Bernd Leno, Rúnar Alex Rúnarsson and Dejan Iliev as the three keepers in the squad.

Despite having three options, the north London club’s manager ‘thinks that Neto, with good footwork’, would be ideal to play from the back. 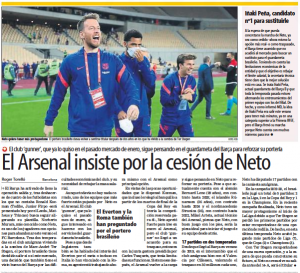 Everton and AS Roma are also rumoured to be interested in the Brazilian, but Mundo state Neto’s agent is ‘working right now with Arsenal as the main option’.

The newspaper adds Arteta’s side ‘insist’ on taking the stopper on loan and after failing to take him in January, and make clear online that Arsenal is the ‘first option’ for the player.