The defender has entered his final year of contract and hasn’t accepted Real Madrid’s renewal offer so far.

Carlo Ancelotti will start pre-season preparations today and Los Blancos have several issues to resolve for the Italian’s second spell at the club.

Sorting out the centre-back’s situation, who is wanted by United, is among them and this is highlighted across several Spanish newspapers today.

Monday’s edition of Sport states the former Everton manager’s ‘first request’ was to retain the 28-year-old, who ‘has everything ready with Manchester United’. 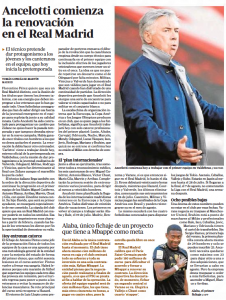 Over at ABC, they explain the France international is one of eight players who could leave the La Liga side this summer.

AS also has a short update on the former Lens man and states extending his contract is ‘another hot topic’ for Real Madrid.

Ancelotti, for his part, wants to go ‘hand in hand with the club in all the decisions made’, and this applies for Varane’s case as well.

The Frenchman expects a gesture from his new manager, that will open the door for him to staying at the Bernabéu. This, however, would only be possible if Real Madrid make ‘small effort’ by offering an improved contract to him. 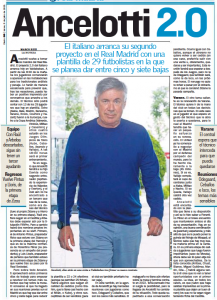 Manchester United’s negotiations for Varane continue, but whether the €45m fee would convince Real Madrid to sanction his sale remains to be seen.