Over the last week or so, we have carried various reports about Real Sociedad’s interest in Nacho Monreal.

On August 28th, Marca reported the transfer could be concluded on Wednesday, but the defender is still at Arsenal. Later that day, Diario Vasco explained that Unai Emery was the major problem for the deal to take shape.

Mundo Deportivo now claims the 33-year-old is now ‘one step away’ from joining the Spanish club.

The Gunners have given a green light for the transfer and only signatures are missing for the agreement between the two clubs. The deal could be made official anytime in the next few hours.

On Wednesday, Sociedad took a ‘giant step’ to find an agreement with Arsenal. With the defender already agreeing to join the La Liga side, his arrival at San Sebastian should be imminent.

La Real don’t expect to have any more contacts with Arsenal today. 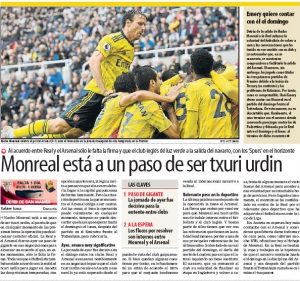 Even though all parties have agreed for the transfer, Mundo states it cannot be ruled out that Monreal’s arrival could be postponed until Monday.

That’s because Arsenal face Tottenham Hotspur this weekend, and the La Liga side are already working on the possibility of Monreal staying at the English club until Sunday and then completing the transfer.