Rumours Hector Bellerin could be on his way out of Arsenal have caught the imagination of the Catalan media, even if they’re not really pushing Barcelona as the prime destination right now.

Prior to Bellerin renewing his contract with Arsenal, the Catalan media had been all over a potential free, or forced with one year left, transfer for the fullback.

Since then it’s been pretty quiet, and whilst things could certainly change, Bellerin doesn’t appear one of Barcelona’s summer targets.

Juventus have been linked, and Sport believe Arsenal themselves are keen on a transfer.

Sport claim the Gunners are ‘determined to sacrifice’ Bellerin, in a transfer sense, to make money for the next transfer window. 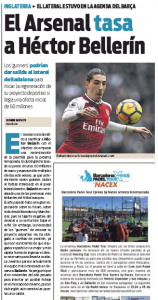 Arsenal ‘hope to make cash with the sale’, and it’s claimed ‘the need of the Gunners to renew theirs sports project has forced them to reconsider’ letting the Spaniard leave.

Bellerin’s potential price is put at €50-60m, and offers are expected to be made.

This could simply be Catalan stirring, and it’s got to be considered unlikely Juventus would go to those levels unless Bellerin finds his best form between now and the end of the season.