We can’t reiterate enough how insistent the Portuguese press are on Arsenal’s idea of signing Andrija Zivkovic.

In recent months there’s been countless small articles about Arsenal sending delegations to Portugal to scout the 21 year old and report back to Arsene Wenger.

It’s been claimed Wenger was keen on the player before he moved to Benfica, making approaches to sign him from Partisan. That didn’t come off and if the Portuguese press are to be believed, Wenger retains the idea of signing the winger.

Arsenal have watched several Benfica matches recently, all coming with claims of it being Zivkovic who is the Gunners’ target. 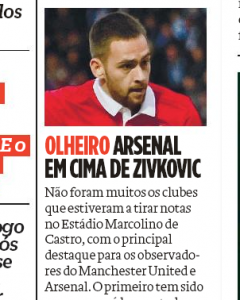 O Jogo say the same in their Sunday edition, with Arsenal watching the youngster in action as he played a slightly more central role for Benfica against Feirense.

It was a good performance, if not spectacular, with Benfica winning the match 2-0.

Manchester United also had a scout present, with O Jogo not claiming to believe they know who Jose Mourinho’s target may have been, and there was also a scout from Montpellier, who will have been more likely to focus on Feirense.