You may have seen a few articles about Sokratis Papastathopoulos over the past few days and been confused.

After all, the Greek defender has been rather quiet since Mikel Arteta took over, and for good reason: he hasn’t really played.

That’s partly why the Arsenal defender has come back in the news, as an exit route is seemingly being looked at.

First it was AS Roma, but it’s now Napoli who appear to have taken the lead, with reports on Thursday claiming that Gennaro Gattuso had had a chat with his former Milan teammate about a move.

Well, that’s fully backed up by local newspaper Corriere del Mezzogiorno on Friday, who outright state the Napoli manager ‘phoned’ Sokratis, who is out of contract in 2021. 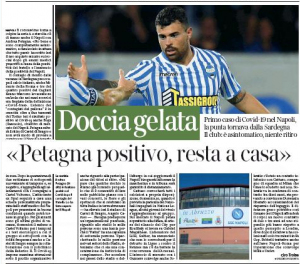 However, they go one step further by claiming the defender is now ‘trying to convince Arsenal to free him of his contract’, thus freeing them of his wages.

That would allow him, much like Alexis Sánchez did at Inter, to sign a contract with Napoli without any issues, perhaps a ‘two or three year one’, at a salary lower to the one he has in London.

That’s a bold move from the Greek, but if he knows he isn’t wanted at the Emirates, it’s an easy way out, and with the Gunners trying to save money left, right and centre these days, it might make sense for them too.