On Wednesday, we were blessed with an interesting article from Tuttosport claiming that Napoli and Arsenal were in talks regarding a swap deal between Sokratis Papastathopoulos and Nikola Maksimović.

Said negotiations were reportedly ‘very far ahead’, and there appeared to be a confidence that a deal could get done, allowing Napoli to get some experience in defence and, in turn, letting a player go who wants more than they are willing to offer contract wise.

The Greek defender has been one of the casualties of Mikel Arteta’s management, and with previous experience in Italy, he certainly could be tempted.

What helps is when the manager at the club is an old friend of yours, as both Sokratis and Gennaro Gattuso were together during the defender’s time at Milan for the 2010-11 season.

This is what Corriere dello Sport are reporting on Thursday, looking at the possibility of the Arsenal man moving to Naples. 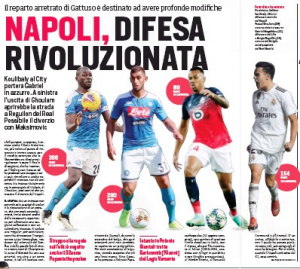 It’s said Gattuso is the one who ‘thought of him’, because he is ‘reliable and a very serious friend’, with the two being able to ‘speak without veils’ as the manager told the defender ‘what he needs’.

First, however, Napoli need to deal with the Kalidou Koulibaly situation, and then the Serie A side ‘will see what will be needed’.