Arsenal are at the front of the queue for Napoli striker Victor Osimhen this summer, with Mikel Arteta keen to add a striker to his squad.

That’s according to Gazzetta Dello Sport, who say the Gunners have ‘set their sights’ in the Napoli star.

Osimhen has been impressing for Napoli since arriving in a £67.5m deal from Lille in September 2020, with 26 goals and eight assists in 56 games so far.

This season alone, he’s scored 16 goals and registered five assists, a figure he is likely to add to before the end of the season.

His performances have not gone unnoticed, and he’s regularly been linked with a big-money move to the Premier League this summer.

Arsenal are known to be keen, with it reported earlier this month that they were sending not so ‘subliminal’ messages about a move. 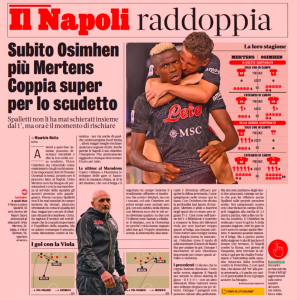 Gazzetta now back that up, stating that Arsenal have ‘set their sights’ on the Nigerian and are currently ‘in the lead’ when it comes to the important Premier League clubs chasing his signature.

Now there’s no mention of an asking price or what they’d be willing to pay, but the same newspaper stated last month that Napoli would want €100m at least.

They already turned down an offer in the January transfer window when Newcastle made a double bid for Osimhen and Fabian Ruiz, and it’s unlikely their asking price has fallen.

Arsenal, then, are going to have to dig deep into their pockets if they wish to win the race for Osimhen’s signature this summer.