A week ago we covered reports from Brazil and France explaining that Wellington Silva’s move from Fluminense to Arsenal to Bordeaux was close.

The deal was getting closer with ‘every passing hour’, and Arsenal would pay the Brazilian club €3.5m before selling the player on to Bordeaux for €5m, all thanks to a buyback clause.

But it’s still not done.

In Friday’s issue of L’Equipe, it’s stated Wellington Silva is expected to sign for Bordeaux ‘at the beginning of next week as we announced in our July 15th edition’.

Well, that’s not quite what was announced. 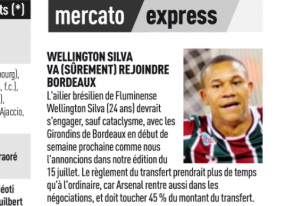 The reason things are taking a little longer is Arsenal. With the Premier League club set to get 45% of the value of the transfer, there’s more hoops for everyone to jump through.

This one may be done in the next few days, but nobody is likely to be surprised if it drags out even further.