On Friday we covered claims from Brazil that Fluminense have just been waiting for the paperwork before sending Wellington Silva back to Arsenal.

The player’s Fluminense exit was getting closer with ‘every passing hour’, and L’Equipe carry on the situation in their Saturday edition.

‘Bordeaux is about to finalise the arrival of Brazilian winger’ explain the French newspaper, and they go on to detail why he’s arriving via Arsenal.

When Arsenal sold the player they kept a right of first refusal, which allowed the Premier League club to buy him back if another side showed interest. Arsenal will therefore sign Wellington Silva for €3.5m and sell him on to Bordeaux for €5m. 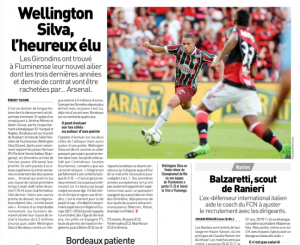 L’Equipe say talks were initiated with Arsenal weeks ago, and the transfer is now ‘imminent’.

The Premier League club will have been careful to make sure there’s no way they use the buyback and Bordeaux then pull out, leaving them stuck with a player they don’t want.

Another €1.5m to add to Arsenal’s transfer kitty.