Marca on Friday explain the Red Devils, the Blues and Mikel Arteta’s side are chasing the defender, who has become ‘one of the sensations’ following his fine displays for the La Liga side.

His form for Sevilla has helped him earn a place in Didier Deschamps’s squad for Euro 2020 and the centre-back made his debut for France in their friendly win over Wales.

The former Bordeaux man has an €80m release clause and only English clubs would be in a position to pay a fee anywhere close to his buyout clause.

Despite interest from Real Madrid and Barcelona, the newspaper states Arsenal ‘can launch the first attack’ to sign Julen Lopetegui’s man.

There has been talk of a proposal made around €56m, but Sevilla have not received an offer so far. Monchi is aware of the club’s need to sell some of the club’s prized assets to improve their economic situation.

Koundé’s exit could see Sevilla break their previous record sale and Marca suggest they can earn in excess of €60m from the France international’s sale in the summer. 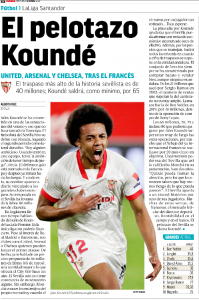 Arsenal are in the picture to sign Koundé, along with United and Chelsea. However, the possibility of them paying €60m plus remains unlikely.

Even if the north London club manage to meet Sevilla’s demands, the lack of Champions League football [or any European football] would put them at a disadvantage.