There are many Portuguese players who have an impressive number of pretenders every summer, but William Carvalho is still on top of this list.

It’s hard to count every club linked to the defensive midfielder since his debut for Sporting some years ago, and now Arsenal, one of the first to show interest, are said to be back. According to Record, Arsene Wenger is convinced it’s worth bidding for the player once again.

They recall the midfielder came close to joining the Gunners in 2015, when Arsenal bid €23m, but Sporting’s demands of €40m stopped the deal from happening. 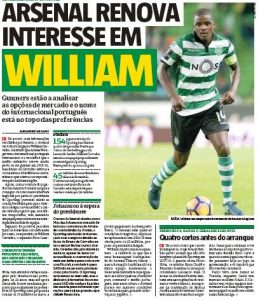 This time, besides the player’s will to move to the Premier League, there’s also a bigger will from Sporting to sell Carvalho. So ‘only’ €30m up front should be enough to take him.

Newcastle United are also mentioned by Record, but the newspaper makes it clear the club have no financial conditions to compete with Arsenal.

Now it’s up to the Gunners to make the first move.