Tuttosport have an article in their Wednesday edition which is sure to annoy Manchester United supporters.

With a headline reading ‘Bianconeri of arrogance’, the club’s plan for Anthony Martial is detailed.

Juventus will work on ‘parallel strategies’ for the Frenchman, which boils down to: Try to sign him this summer or wait until next year and get him for free at the end of his contract.

Tuttosport explain that similar happened with Emre Can, they offered Liverpool €35m last summer and when that was rejected the Turin club simply waited and signed the German midfielder for free.

For a transfer this summer, Juve are said to value the move at €50-60m, whilst Manchester United want €80-90m.

It’s not mentioned by the Italian newspaper, but whilst Martial’s contract does expire in June 2019, there’s a further year option on the deal. 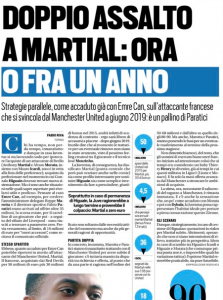 Those options usually fall on the club’s side, which would mean Manchester United having the power to extend by a further season.

Unless Martial’s agent negotiated otherwise, Juventus wouldn’t be able to sign Martial for free next summer.

This could be misplaced arrogance.