Sign it or leave us. That would be Real Madrid’s offer to Isco at the end of this season.

As reported by Mundo Deportivo on Tuesday, the club want him to agree a new contract or walk from the club immediately, ruling out the possibility of letting him go for free in 2018.

Isco is reportedly not happy with his current role in Zinedine Zidane’s squad, as he’s not getting the starts he wants. Now the player would have adopted a silent attitude until the end of the season, when he’ll sit and talk to the club representatives. 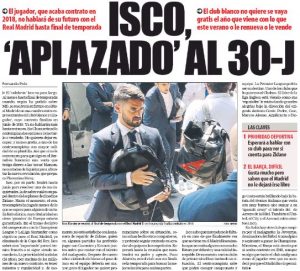 These few months will also work for him to feel how important he is for the club, since Madrid will enter in crucial stages of the Champions League and La Liga.

Mundo Deportivo rate Isco really highly, saying the player would ‘choose the league and the club’ to play for in case he leaves. Among the interested sides, Antonio Conte’s Chelsea is said to be the main one.

Arsenal, Manchester United and Manchester City are also said to be aware of the player’s situation. Mundo Deportivo don’t mention how much Isco would leave Madrid for, but with only one year left in his contract, we reckon the price wouldn’t be very high.

Chelsea are one of a number of clubs who have repeatedly been linked with Isco in recent years, and Mundo Deportivo believe that Conte is keen on the move because he’s seen the success Chelsea’s Spaniards have enjoyed in the Premier League.