We hate to bring bad news, but there’s another problem on Pepe Reina to Aston Villa, at least according to Corriere dello Sport.

Earlier, we covered claims from Italy that Reina is continuing to demand severance pay from the Serie A club for the final 6 months of his contract. The Rossoneri are also keen to bring in a replacement before they let the goalkeeper go.

Corriere dello Sport state Milan are ‘demanding compensation’ from Aston Villa to enable Reina’s transfer, which means they want a fee. How much that is hasn’t been revealed.

And there’s another problem.

Gianluigi Donnarumma’s contract expires in June 2021, and, as ever, Mino Raiola is making the situation very difficult. Partly for that reason, Milan don’t want to promote their third choice stopper, Gianluigi’s older brother Antonio, to be their second choice and have their whole goalkeeping department resting on a renewal which may not come.

Raiola would no doubt use the situation to pile even more pressure on Milan. 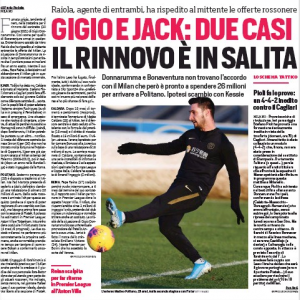 This isn’t reported, but there’s surely a possibility that if Reina drops his demand for severance pay, then Milan may drop their demand for compensation.

That doesn’t solve the club’s other goalkeeping worries, though, and there’s a suggestion the Rossoneri aren’t entirely convinced Emiliano Viviano is the answer.