On Friday, English newspaper The Telegraph claimed a €25m West Ham offer for Cedric Bakambu had been rejected by Villarreal.

That claim has of course quickly made its way to Spain and allows the Spanish media to firm up Villarreal’s stance regarding the player.

Mundo Deportivo report that Villarreal want €30m for Bakambu, which isn’t really such a great jump for West Ham to make.

If Slaven Bilic and the club have genuinely identified Bakambu as a target, and aren’t simply throwing bids around like confetti, then it would be nonsensical not to make the extra €5m effort for the player. 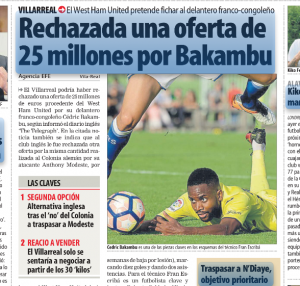 In the current market, the difference between €25m and €30m for a striker is a small amount for a club of West Ham’s signing, especially when it’s considered Bakambu wouldn’t arrive on a huge salary from Villarreal, so the deal wouldn’t be very expensive in that respect.

Should the West Ham offer be genuine, then it’s got to be considered likely they’ll return.