There’s one player everyone at Sport Witness would like to thank for his ability to get linked with every club under the sun: Hull City’s Abel Hernandez.

The Uruguayan striker will be a free agent come the end of the month when his contract at KCOM Stadium expires, which means a number of sides are queuing up, among which are Cagliari.

According to Corriere dello Sport, the Serie A club have added the forward to their list of transfer targets this summer, and have even enquired about his future plans, which could prove a problem for Leeds United.

Marcelo Bielsa’s new club have been linked with the soon-to-be out of contract forward, with claims of ‘advanced talks’ a couple of weeks ago.

Over in Italy, the move is seen as a potential bargain for Cagliari, knowing Hernandez already has experience in the league, having spent five years at Palermo prior to his £11m move to Hull City back in 2014. 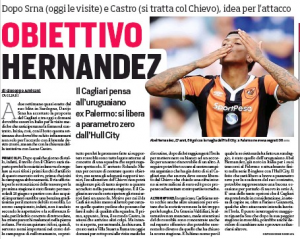 If Cagliari end up being the sole rivals for the striker after he reportedly turned down Galatasaray’s offer, then Leeds might not feel too threatened, likely to be able to offer more wages.

Despite missing a huge chunk of the Championship season due to an Achilles tendon injury, the 27-year-old still scored eight goals and picked up two assists in 10 appearances.

During his time at KCOM, Hernandez scored 39 goals in 110 games, most of which came after the club dropped back down to England’s second-tier.